Erik Edgren - Clipped Wing Taylorcraft - Aerial Antics
​
Erik Edgren A.K.A. Hobie Washburn, is a natural airshow performer – personable to the public, engaging to the media and a rare, polished stick and rudder pilot. His family-friendly comedy and finesse aerobatics act make him a unique change of pace and entertaining addition to any airshow.

Erik can’t remember his first airplane ride…because he wasn’t born yet! He began “training” at the age of 6. He sat on his father’s lap and flew on instruments. Erik was ready for solo at the age of 8 thru the use of a tailor made seat and control extensions. At age 10, he learned spins, which sparked his lifelong passion for aerobatics.

Erik has worked as a Flight Instructor, an Instructor/Pilot for an air combat school in the AT-6/SNJ and as a Corporate Pilot in Lear Jets, Kings Airs, etc. He has flown over 140 different makes and models of aircraft. A farmer by trade, Erik takes to the air as naturally as he plants his fields. A modest but gifted pilot, Erik is thrilled to be living his dream flying a one of a kind comedy/aerobatic act in the “T-Clips.”

The “T-Clips” was originally built by Taylorcraft in 1939. It was “Clipped” for aerobatics in 1997 by Steve Givens using a mix of both the Swick and Legendary Duane Cole plans. Erik has further modified the T-Clips with inverted fuel and oil and airshow smoke systems making it an optimal and unique “up close and personal”, crowd-pleasing airshow machine. It may be the only Clip T performing in airshows today with the “old school” Continental C-85.

Airshows are a family affair for the Edgrens. Erik’s beautiful wife Stephanie and his son John enjoy flying and attend almost every airshow with Erik. 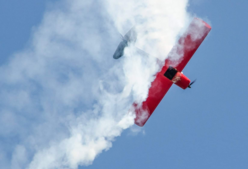 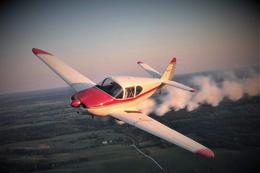 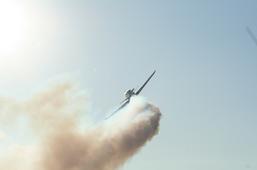 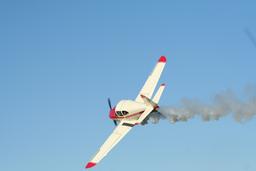 Down and Dirty, Grace and Fury, Finesse Aerobatics in the Super Swift.  Erik brings his 'Smooth Flowing Lines' style of aerobatics to a new act in the classic Globe Swift.  It is no coincidence that the Swift evokes the lines of the legendary Curtis P-40 Warhawk, as a Curtis engineer worked for Globe.